How Much Does Google Ads cost?

Quite a common question I get asked about Google Ads is how much it will actually cost you.

Well the good news is you’re actually in complete control of your own budget so whether that’s on a daily basis or on a monthly basis, Google’s pretty good at sticking to your budget. So there is a slight difference between daily and monthly budgets.

With a daily budget you can set the amount how much you actually spend in a day.

So for example if you’ve put down 10 pounds or 20 pounds a day, Google will stop once you hit that limit, and with a monthly basis, you can set it on a let’s say a 500 pounds a month that you’re going to spend on Google Ads. Well that gives Google a bit more license to use your budget how and when they see fit. So for example, there might be a lot of demand or a lot of searches in the first week of  the month, so they may actually allocate a bit more of your budget in the first week and therefore  your remaining budget would be stretched out a little bit thin for the weeks 2,3 and 4.

So I would recommend putting in a daily budget rather than a monthly budget. As a note, if you’re setting your budget on a daily basis, Google may actually go for your strict; you know ten pounds or twenty pounds daily limit. And  the reason why is because their algorithm thinks that this person who’s searching, might actually convert for you and therefore they’re going  to push your ads on and even if it crosses over your daily budget, it won’t actually go over that amount on a monthly basis.

Another factor in how much you will pay for Google Ads is actually the geographical location that you’re going to be advertising in.

So, whether you’re covering London, Manchester, Newcastle or the whole of the UK, you might actually be paying a bit more for certain areas. So for example, if you’re a plumber or electrician in Newcastle and you’re doing Google ads and if you were doing exactly the same services down in London, the competition in London would be far greater than Newcastle. And therefore the price of your Google Ads cost-per-click is actually going to increase. But again, if you’ve set a budget at 10 pounds a day or 20 pounds or 50 pounds a day; it’s not going to go over that much.

Learn To set up your google ads campaign effectively

So one of the key factors that’s going to affect how much you’re actually going to pay for Google Ads, is actually the industry that you’re operating in, and also the level of competition.

So, imagine if you have gone up against one or two competitors, and they are not skilled in Google Ads, then your chances of success are a lot higher than let’s say a business who has, sorry industry who has a lot of businesses advertising on, who have high degrees of skill in Google Ads. So it really depends on your level of competition. And also as well there are different ways to actually reduce your costs, even in a competitive field, and I will be touching on those soon.

So, even in a competitive industry, you are still able to get low cost keywords.

So what I mean is, if you’re searching for, let’s say, leather shoes, you’re going to have the likes of Next, John Lewis shoe. All these different businesses will be advertising and competing against you. But if you choose and if your research shows that you know a lot of people are searching for size 7 brown leather shoes for men then you can actually restrict your search on your budget on that keyword if you want.

And therefore if your competitors don’t pick that up and you do, you are able to go on a lower price and also as well because the search intent is there because they’re very specific.

Your chances of actually selling on that are a lot higher than let’s say “leather shoes”. So that’s how you would actually compete against other businesses who have far greater budgets than yourself.

The final factor that I’m going to touch on is also called the quality score.

And if I just give you a bit more information about it, it just gives you a sort of the idea as to what optimising your Ads on your site can actually do for your Google Ads and your responses to them.

So for example, to go back to the leather shoes, if you have” leather shoes size 7, you know for men” text actually  in the advert, then it’s going to score a lot higher than, a generic “leather shoes”, because some people might actually search  ”Where can I buy leather shoes in Newcastle?” And if your advert is just saying leather shoes or even if it has,” size 7 leather shoes  for men”, it doesn’t actually match up that well.

But if someone is searching for “Where to buy leather shoes in Newcastle?”, and you’ve got an advert with “Newcastle leather shoes”, then obviously, you know the relevancy of that advert is a lot higher. So that’s one section of the advert that you have to look at.

The other section of your relevancy in quality score is actually your website and your landing page that you direct people to.

So again taking from that example, if someone was to search for leather shoes in, “where to buy leather shoes in Newcastle?” and you’ve got an advert for ” Newcastle leather shoes, buy here, size 7 to 12” and then you direct them to your Homepage which  you cover  other clothing women’s, children, then that last section you’re going to be so marked down on.

Because you’re directing them to, people to a Homepage which is very generic, which you know, requires them to start searching. So therefore, Google Ads is going to sort of penalise you for sending to your Homepage, whereas if you direct them to a page, where it’s your Newcastle store, size 7, men’s leather shoes directly to that landing page or a service that people are searching for, then your relevancy score is going to be a lot higher because they all match.

Especially if you have your page titles, your H1 tags and your metadata and all the different synonyms within your website, then Google is  going to actually reward you with that.

So, how did they actually reward you?

Well, if someone’s actually paying fifty pence per click, for a search term and they’ve got a pretty poor relevancy score quality score, and you really optimise your adverts and your landing page and you get a really high quality score, you can actually be rewarded with cheaper costs, as in cheaper clicks.

So you may be paying 20 pence rather than 50 pence and your ads may appear higher than your rivals.

So, again, it bodes well to actually optimize your adverts and send them to a relevant page, rather than to a generic homepage.

Okay I hope that’s helped and given you a bit more information and food for thought.

If you are looking to try out Google Ads, I recommend you just do it on a small budget and test it out, because really there is no sort of a secret recipe for successful Adwords.

It’s all about testing out, but the thing is, you can actually test out very small, with using small amounts and then once you find something that works, that’s when you put a bit more in your budget and then obviously see where the results come back from that and if it does, then great you’re onto a winner and you keep putting more money into your budget because you’re getting more sales back.

And really that’s how Google Ads works, so hopefully that’s helped you out a bit and I’ll be doing a few more of these videos.

Leave a comment on here and if you’ve got different areas that you want me to talk about or you know, explain, more than happy to.

Speak to you  later!

PrevPreviousWhat Is Google Ads?
Next6 Costliest Mistakes In Google adsNext

How To Set Up Google My Business 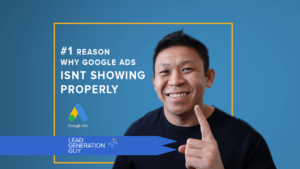 Sure Send Me My free Checklist >>
No thanks, I don't want a more profitable campaign